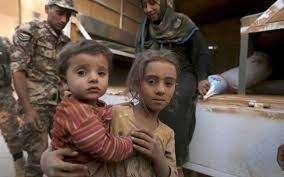 Maryam Putris is an Assyrian Christian originally from Iraq recently spoke here at Willougby Church by invitation from the Just Faith Forum. Here's a summary of what she had to say regarding the injustice, chaos, and violence that has consumed the Middle East for years, driven by a complexity of religious, political, economic and social factors.

My family, as Assyrian Orthodox Christians, experienced much persecution and injustice by other religious and ethnic groups. Today the persecution of Christians in the Middle East, in countries such as Syria, Iraq and Turkey continues and their communities of diaspora around the world are growing. Along with the Christians there are many Muslims, Yazidis, Kurds and other religious and ethnic groups that also grieve for the loss of family members. Among them you will find, a lost generation of children and of youth that have lived the majority of their lives surrounded by violence. They and their parents are also  emotionally and psychologically scarred from the horrible violence they have seen, and they as well desire for a sense of  belonging and rest. It is important to remember that those that are burdened with such pain are the refugees that we welcome into our homes,    churches, and communities. As servants of God we are called to care for the hearts of others. We are called to be compassionate to everyone. We are called to be peacemakers. I believe we can be peacemakers in this refugee crisis by opening our hearts to feel their pain, listen to their fears, hopes and dreams. Such love builds bridges, such love is what we need. Being part of a persecuted minority community in the Middle East, my family and I have felt the destruction that war, greed for power, and corruption brings to people’s lives, and we believe that love is the only antidote to such destruction. As a community that yearns for our homeland and for our history, we have learned that we must forgive so we can make room in our hearts for the hurting and the needy. Thank you for welcoming us and others.