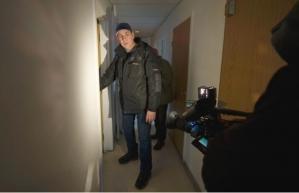 Myth-Busters: let’s bust myths about homelessness in our cities

Poverty in our cities is cruel. Jagrup Brar, MLA (member of Parliament) for Surrey, (see photo of Jagrup Brar entering the 'Single Room Occupancy' hotel that was his home for a month) volunteered to live on the lowest welfare rate: $610 a month. Brar’s experience displays the suffering of thousands in our wealthy cities. Brar lived in downtown Vancouver, first in illegal housing and then in a residence for single men. $425 was the cheapest accommodation available leaving him with less than $200 to live on for the month. After two weeks Brar had $25 left. He became dependent on free meals. He lost weight. Brar’s office said that texts from his cell phone became less coherent as the month progressed.

Catch-22s abounded. Brar blogged on the frustration of having to pay $4 to travel on a bus to access free food or clothing. He wrote about legal restrictions on work. Money earned in part-time employment is deducted from welfare payments dollar for dollar. ‘Binning’, making some money from recyclables found in garbage bins, is a way to supplement welfare. However only those with permission to earn money (given for example to those with disabilities) can keep their earnings. These laws make return to work via part-time employment unrealistic and create a cycle of unemployment.

Brar blogged on the serious health issues his friends suffered and the inaccessibility of treatment for them. He spoke of the lack of hygiene in public housing referring to one building that offers 1 toilet for 120 residents.

He blogged: I am told that there are 5,000 people living in ‘Single Room Occupancy’ hotels in Vancouver. A majority of them have no cooking facilities. As a result, these individuals have to line up for free food, sometimes for two to three meals a day, spending over four hours in line ups.

In response to his blog a journalist wrote: ‘It is impossible to live on $610 per month without going to charities or resorting to survival tactics’. Brar is calling on B.C. to ‘raise the rates’.

Myths abound regarding homelessness. ‘They want to be there’. ‘They should get a job’. ‘They are all addicts, so don’t help them’. This is not Brar’s experience of the people he spend January with. It is essential that we seek real information about homelessness. Reading Jagrup’s blog is a good start. Take a look at Jagrup’s blog yourself.

Here are three suggestions: First, if vulnerable people are to be dignified then basic welfare rates in B.C. need to be raised. Wherever we live, at election time let’s pay attention to the domestic welfare policy of each party. Second, do we not have a personal responsibility towards homeless people in our suburbs? It is easy enough to offer to buy a person ‘on the street’ a meal. In my experience homeless people almost always desire a meal, when offered. Third, Christian communities must find creative and personal ways to offer Christ’s radical hospitality. Jesus said, ‘give to the one who asks’ (Matt 5:42).