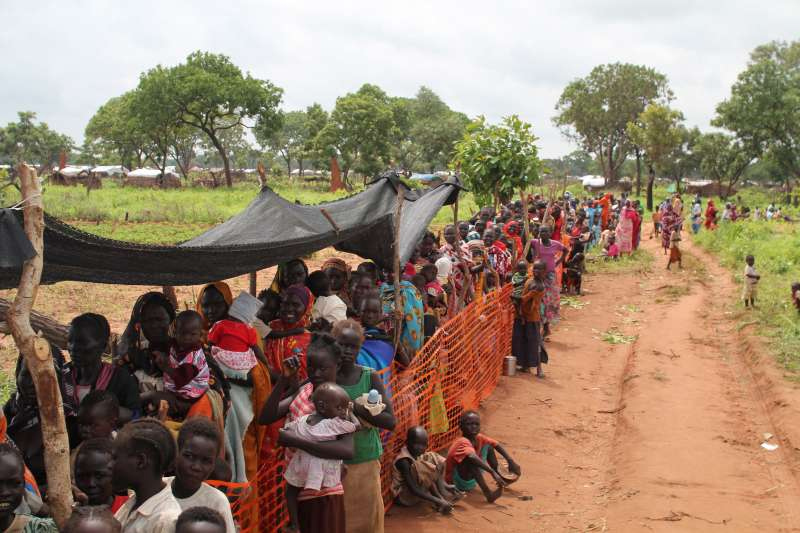 Perhaps the most famous scripture passage that speaks to the issue of welcoming refugees is: "He executes justice for the fatherless and the widow, and loves the stranger, giving them food and clothing. Love the stranger, therefore, for you were strangers in the land of Egypt. "(Deuteronomy 10:18-19)

Christian activists rightly use this passage to demonstrate that vulnerable people who seek a home ought to be welcomed. Here I will investigate this passage in some depth.

There is, in the Old Testament, a category of people who don’t come from the community of Israel, is of a different ethnicity to them, and is reliant on them. The Hebrew word for this category of people is ‘ger’. ‘Ger’ is translated in various ways: NIV: alien/stranger; ESV: sojourner; KJV: stranger; NRSV: resident alien. There are 21 references in Deuteronomy to the ‘stranger’. This figure indicates the large number of displaced and vulnerable people in Israel at that time. It indicates too the importance of Israel’s response to these people. Here are a two examples:

This passage comes from the Ten Commandments. The ‘stranger’ must be able  to rest on the Sabbath, as the Israelite is. The ‘stranger’ in other words, must not be used as cheap labour to be exploited.

2.  "And you shall rejoice in all the good that the LORD your God has given to you and to your house, you, and the Levite, and the sojourner who is among you." (Deut 26:11)

Seasonal sojourns to ‘the place the Lord will choose’ punctuate Israel’s calendar with a rhythm of worship and celebration. Yet these celebrations are radically inclusive: Israelite households include the ‘stranger’, orphan, widow and Levite in their journey and celebration – four groups who are economically vulnerable and often without land themselves. Together with the ‘stranger’ and other vulnerable people, an Israelite household journeys to the sanctuary, worships and then feasts together with great joy (16:11, 14, 26:1-11). These inclusive harvest festivals are a striking example of the radical hospitality and ‘home making’ for displaced people that Israel is called to. There is no comparable example of such radical hospitality among Israel’s ancient near east contemporaries that I am aware of.

I pause here to ask: Where do these people come from? And why are they so many? Some seek another place to live because of poverty. The book of Ruth begins with an Israelite family leaving their home and finding a home in Moab due to famine (Ruth 1:1-2). Displacement from war was another way people were ‘refugeed’ in ancient times.

Now I come to the key text:

"He executes justice for the fatherless and the widow, and loves the stranger, giving them food and clothing. Love the stranger, therefore, for you were strangers in the land of Egypt." (Deut 10:18-19)

The word ‘love’ is a key Hebrew word for covenant commitment. (Hebrew: ‘ahav’). It is a word laden with significance: it is used for YHWH’s covenant commitment to Israel, his people. We learn here then that YHWH has a fierce loyalty to the vulnerable stranger. He is on the stranger’s side. ‘YHWH loves the stranger’. Structurally Yahweh’s love for the ‘stranger’ is parallel to Yahweh’s love for Israel. Verse 15 reads:

"Yet the LORD set his heart in love on your fathers and chose their offspring after them, you above all peoples, as is the case this day. Circumcise therefore the foreskin of your heart, and stiffen your necks no more." (Deut 10:15-16)

I must admit such passages dazzle me somewhat. Why is YHWH so committed to the poor and vulnerable? Where do such strong statements as this come from? Gustavo Guitierrez, a Peruvian scholar, is helpful here. He points out that: ‘God is committed to the stranger, not because vulnerable people are good – but because he is good.’

Let me get specific now: in what ways does YHWH love the ‘stranger’?  First, by exercising Justice (vs 18). If humanity won’t exercise justice, God will secure it just the same. God, in Christ’s resurrection, has secured a future for his world of justice and thriving for all.

Second, YHWH loves the stranger by giving them food and clothing (vs 18). YHWH’s providential concern and care extends, especially, to vulnerable people.

Israel is to love the stranger.

"Love the stranger, therefore, for you were strangers in the land of Egypt." (Deut 10:19)

This verse is referring to that time when Jacob and his family went down to Egypt in a time of famine, seeking food. In those days, Joseph was Egypt’s vice-President, and Pharaoh showed Jacob’s family hospitality. Yet when a new Pharaoh came to power Israel was oppressed and forced into hard labour.

This verse then is insisting that Israel shows the stranger the hospitality that she herself would have liked to have been shown in Egypt. She is to love the ‘stranger’.  Yet practically, what does it look like for Israel to ‘love the stranger’? I will go to two passages from Deuteronomy:

1. The stranger can live wherever they want in Israel – and anyone and everyone is welcome to live in the land!

"You shall not give up to his master a slave who has escaped from his master to you. He shall dwell with you, in your midst, in the place that he shall choose within one of your towns, wherever it suits him. You shall not wrong him." (Deut 23:15-16)

2. The stranger shares life and celebration with Israelites! For example at the feast of weeks:

"And you shall rejoice before the LORD your God, you and your son and your daughter, your male servant and your female servant, the Levite who is within your towns, the sojourner, the fatherless, and the widow who are among you, at the place that the LORD your God will choose, to make his name dwell there. "(Deut 16:11)

As I noted above, an Israelite household journeys to the sanctuary, worships and then feasts together with great joy (16:11, 14, 26:1-11). The Levite, stranger, orphan and widow are included in this celebratory feasts. These inclusive harvest festivals are a striking example of the radical hospitality and ‘home making’ for displaced people that Israel is called to.

These meals reflect the radical welcome of Christ. New Testament scholars have said that: ‘Jesus literally ate his way through the gospels.' And so he did. And Jesus ate with all the wrong people! It has been said too that Jesus was killed for who he ate with! He ate with outcasts. We might call these meals, ‘meals of the Kingdom’. Such radical welcome show us the shape of the Kingdom of God: celebration, relationship and radical welcome.